Helping hands for rhinos at risk 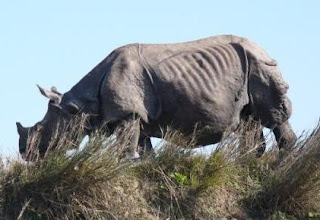 It is hard to imagine but true that the species that rubbed shoulders with the prehistoric dinosaurs are once again in the great risk of being wiped out due to the avarice of human beings. The rhinos lived in grasslands, forests and wetlands of South and South East Asia long before humans arrived, their ancestors were here 40 million years ago. Indricotherium, the most impressive of all the extinct rhinos was the largest land mammal ever to live on earth.

Currently, five types or rhinos are found worldwide. White rhinoceros are the largest and most common one, with a broad square-shaped mouth, found mainly in South Africa. Black rhinoceros are the fastest one with a hooked upper lip, found in east and southern Africa. Javan rhinoceros are the rarest one, only 60 remaining in the west Java's thick forests in Indonesia. Sumatran rhinoceros are hairy one, like to wallow in muddy pool, with only 300 left in Burma, Indonesia and Malaysia. The greater one-horned rhinoceros – having most folded skins, are found in India and Nepal.

The greater one-horned rhinoceros population faces a grave threat from poaching. Once, there were 600 rhinos in the wild in Nepal, but the population slumped down to 372 due to the security problem during the insurgency in Nepal. However, with the concentrated conservation efforts, the number has gone upto 435 as per the rhino count conducted in 2008.

Poached for its prized possession
"The rhinos are poached for their horns and the poaching is well organized," says a local in Chitwan, home to the second largest population of one-horned rhinos. "Most poachers work in gangs and the methodology is such that each member of the gang has to do only a specific task."

A member of the gang just locates the rhino and gets a meager sum of money, sometimes even a bottle of beer works for him. They are generally poor local people. They take the benefit of rhinos' behaviour – they like to wallow in water bodies and they leave dung in big piles, using the same path in the vegetation again and again. Another member of the poaching gang shoots the rhino and the third member hacks the horn from the dead rhino's body. Then one member takes the horn to cities like Kathmandu from where the horn could be passed on to either China or India. The amount earned by the gang members escalates with each higher layer and finally the rhino horn lands at a prized amount of approximately Nepali rupees 800,000 (around USD 10,000).

In a number of the Gulf countries, men traditionally wear daggers and the most expensive handles are made from rhino horns. The wearers of the daggers still command respect in the society.

In Greek mythology, rhino horns were said to possess the ability to purify water. Rhino horns were carved out into beautiful ornamental drinking cups to detect poisons. The ancient Persians of the 5th century BC thought that cups carved from the rhino horn could detect poisoned liquids, causing bubbles in the presence of some poisons. This belief persisted till the 18th and 19th centuries among the royal courts of Europe.

The researchers say that this may have been because many early poisons were strong alkaloids that may have reacted strongly with the keratin and gelatin in the rhino horn, thereby indicating the presence of poison.

Besides poaching, destruction of habitat and conflict with humans over living space remain the major threats to saving these magnificent species.

Concerned community members
The communities living in the vicinity of protected areas are well aware of the plight of the rhinos and they know that without rhinos the tourism business will suffer. A mahout (elephant handler) in Chitwan says, "The tourists come to see the rhinos." "If we can't save the rhinos, all of us will lose jobs."

In a shocking incident, a live rhino's horn was hacked off by the poachers, leaving the rhino writhing in pain. The rhino died after two weeks in spite of being treated by the veterinarian and officers of Chitwan National Park. The community members were so enraged that they padlocked all the offices in Sauraha, Chitwan and demonstrated on streets to pressurize the government and concerned people to save the rhinos. A hotel owner in Sauraha says, "If the locals find out the culprits, they will beat them to death."

Fences of harmony
Besides the anti-poaching patrols, the communities have started planting mentha (mint), chamomile, lemongrass and citronella plants in their lands bordering the national park in Khata. " Farming the crops that are unpalatable for the rhinos has reduced the human rhino conflict , " says Bhim Bahadur Pun, a farmer in Khata. "We are also getting better price for the essential oil produced from these crops."

With the financial support from organizations like WWF, the communities have put up electrical fences around their fields and community forests bordering the parks in Chitwan and Bardia. This has also reduced the conflict.

Youths for a Secured future for rhinos
Not only the elder members but the younger members in the communities living near the protected areas are concerned about the fate of rhinos. Most of the schools in these areas have formed eco-clubs. Eco clubs are independent group of students working collectively to support conservation. The students stage street dramas to aware the community about the ills of poaching and benefits of conserving the endangered species.

An enthusiastic eco club member in Chitrasari, Chitwan says, "The rhinos too have the right to live along with the humans."

"All of us know that they will vanish like dinosaurs if we are not able to stop the rampant poaching. So, though street dramas, we try to educate the locals on how to stop the poaching of these magnificent animals."

Adding to this a teacher in Chitwan says, "The rhinos will continue to live as long as the young generation is concerned about them."

"The rein is in their hands."
Posted by sankuchy at 18:15 No comments: Links to this post